JKUATES received from the Japanese inventor and “champion” of instant noodles, the company NISSIN, a laboratory and a production plant to produce ready meals with instant noodles as a gift. 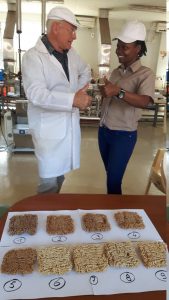 Based on well-known Kenyan raw materials with a positive health image (whole grain wheat flour “atta” and sorghum), formulations in kilogram-scale should be tested, optimized and then tested in the scale-up on machinability.

The availability of different wheat flours from the regional mills was first tested and additionally rice flour, bean flour and calcium carbonate were tested as modifiers for processing, taste and colour. Intensive discussions were held on issues of packaging material and packaging design. With 11 new formulations, the foundation stone for the future optimization of the formulations and technology was laid.

The departure from Nairobi, i.e. “out of Africa”, was not allowed to end without a visit to the Karen Blixen Museum.